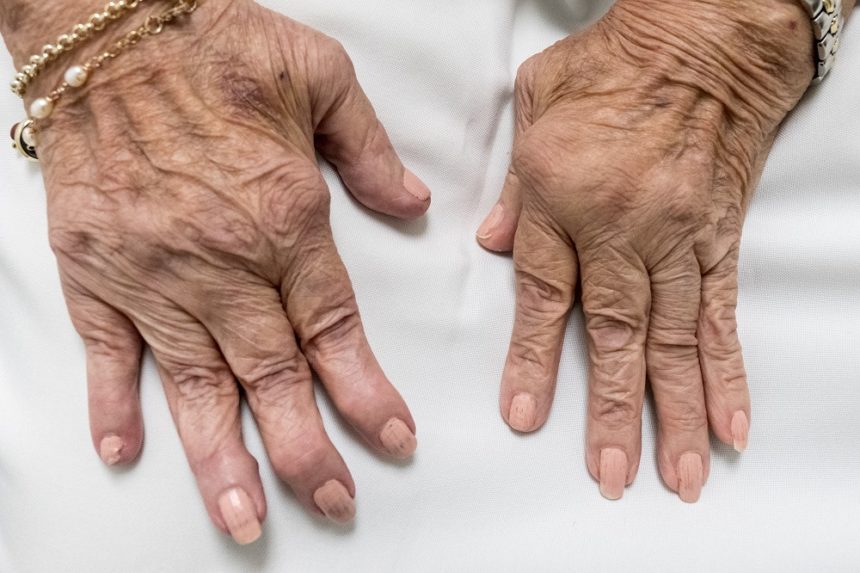 Rheumatoid arthritis (RA) is an inflammatory disease of the joints that affects 1% of the world’s population. The peak age of the disease occurs for women – on average about 41 years, for men – about 45 years. Women suffer from rheumatoid arthritis 2-4 times more often. The ratio of women to men is on average 3:1. According to international data, RA shortens the life expectancy of patients by 5-10 years. This disease is not only a major medical problem due to its progressive nature, unpredictability and insufficient treatment efficiency, but also has a great social significance due to the high frequency of loss of working capacity and increasing disability. In addition, RA greatly affects the daily life of patients, as the unpredictable progression of the disease causes patients to fear the future. The disease is difficult to treat, has negative psychological consequences for the patient, because a person is worried about the increase in mobility restrictions and side effects of treatment. The disease negatively affects all areas of life of such patients: work, leisure, environment, behavior, family relationships, sexual activity. For the effective treatment and rehabilitation of such patients, specialists from many fields are involved – rheumatologist, cardiologist, pharmacologist, psychologist, nutritionist, physical therapist, who sometimes accompany the patient for life in a hospital, sanatorium, and at home.
Unfortunately, even children face rheumatoid arthritis, in which case the disease is called juvenile rheumatoid arthritis. We want to talk about two such cases among our  clients today.

Patient 1, a boy from Kryvyi Rih, 12 years old. Juvenile rheumatoid arthritis. There is no genetic predisposition to the disease, the cause of its occurrence has not been clarified. The disease progressed actively for two years. The child practically could not move on his own without pain, school education had to be changed to a home form of education. Standard treatment did not give the desired result, the condition worsened, constant bad test results, high ESR. In search of treatment or at least relief of the condition, the family turned to the clinic in 2020. The boy did not have his own supply of stem cells, so the cells of choice were donor mesenchymal stem cells (MSCs), which were allowed to be used by the boy’s pregnant relative.
After the birth of the child, umbilical cord blood and umbilical cord were collected, from which MSCs were isolated. Umbilical cord blood was saved for the newborn, part of the MSC was transferred for treatment to the sick boy.
After the first intravenous injection in November 2020, the boy’s condition improved, after 5 weeks the pain was partially gone, the child began to exercise cautiously, and returned to school.

The second application of mesenchymal stem cells was carried out in April 2021. As the mother notes, a year and a half after the second injection, the boy’s condition is still satisfactory. Pain and swelling have disappeared, the need for constant use of hormones, painkillers and anti-inflammatory drugs has disappeared, the child is engaged in sports and leads the normal life of a teenager. The prognosis is cautious, but the family, the doctor and of our team sincerely hope that the boy will get rid of the problem forever.
Patient 2, an 11-year-old boy. Autoimmune arthritis after stress on the background of the transferred coronavirus infection, primary symptoms, changed blood formula. Additional complaints are fatigue, nervous tics, sleep disturbances, irritability. Has its own deposit of umbilical cord blood collected at birth. Parents refused standard treatment for rheumatoid arthritis. When analyzing family history, family risks of autoimmune diseases were revealed.
The use of umbilical cord blood was carried out in May 2021, the entire deposit was used once. Symptoms of the disease, as well as neurological manifestations, disappeared within two months. After the obtained result, the mother of the child sincerely recommended to save the umbilical cord blood, umbilical cord and placenta to her pregnant friend.
Of course, stem cells are not a panacea, their effect is not only in repairing damage, but also in the ability to start the self-healing mechanism in the patient, and is individual. It is the child who has the greatest potential, his body constantly produces active stem cells and is able to “repair” itself. As we age, our stem cells undergo changes, their number decreases and their quality deteriorates. That is why it is so important to have a supply of own young cells that are painlessly collected after the birth of a child from waste material.
The potential of stem cells in the treatment of arthritis has been studied for a long time. Most often, mesenchymal stem cells obtained from various sources are used – from the umbilical cord, placenta, own adipose tissue and bone marrow. The choice is not random, patients very rarely have their own cell deposits, and MSCs from healthy donors are considered universal cells for non-familial therapy. These applications have the status of clinical research or experimental treatment, because the cells have not only a direct effect, but lead to a complex effect on the body, which is still being studied by specialists. It is important that all studies note the safety of cell therapy for patients, provided that the source of stem cells is chosen correctly and the treatment tactics are successful.
In the case of rheumatoid arthritis, MSCs have a pronounced immunomodulatory effect, restore connective tissue, stimulate the regeneration of joint surfaces, slow down or even stop the degeneration of the affected organs. This allows you to reduce the frequency of relapses, prolong remission, get rid of pain, stop the constant use of drugs.