The potential of mesenchymal stromal cells for the treatment of myocarditis 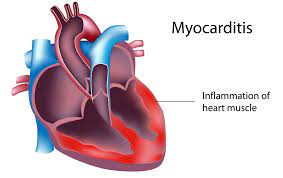 The potential of mesenchymal stromal cells for the treatment of myocarditis

Myocarditis is a relatively new disease that began to be studied in the 20th century. The prevalence of myocarditis is up to 20% of all non-coronary heart lesions and from 5 to 11% of all diseases of the cardiovascular system. According to the “Global Health Assessment” published by WHO for 2019-2020, heart diseases account for 16% of global mortality. This fact, as well as the fact that myocarditis often occurs in young people despite the absence of damage to the coronary arteries, makes this disease a real challenge of the 21st century. The global pandemic also complicates the situation, as the number of myocarditis associated with SARS-Cov-19 has recently been increasing.
Myocarditis is characterized by diffuse inflammation of the heart muscle, the causes of which can be quite diverse: infections, parasitic invasions, chemical factors, taking certain drugs, allergic and autoimmune diseases, and even heart transplantation (although, paradoxically, it is the only method of treatment for extremely severe cases of myocarditis). Since there are many etiological factors, there are also many aspects of treatment: therapy of the key factor that led to the occurrence of myocarditis, symptomatic therapy (which supports the function of the heart and other organs), non-drug treatment. However, in many cases (for example, the majority of viral myocarditis, autoimmune myocarditis) it is impossible to cure the main factor of development, because sufficiently specific drugs either do not exist or do not have the desired effectiveness.
Scientists have long drawn attention to the ability of stem cells to improve the condition of patients with myocarditis. But which cells should be used – from the patient’s bone marrow, fat or from the umbilical cord and umbilical cord blood, own or donor? But how much can stem cells improve the prognosis of patients with myocarditis?
For the treatment of adults, mesenchymal stromal cells (MSCs) turned out to be the most interesting. They can be obtained from various sources – umbilical cord, fat, bone marrow. Due to the low immunogenicity of MSCs, it is possible to use not only own cells, but also those obtained from a young healthy donor or from donor postnatal material.
MSCs have pronounced immunomodulating and proliferative properties, capable of simultaneously reducing inflammation in the affected area and replacing damaged heart cells on their own. But the paracrine action of MSCs proved to be the most valuable. By secreting a constellation of active substances, growth factors, cytokines and exosomes, mesenchymal stem cells promote vascular growth, inhibit fibrosis and eliminate apoptosis, which is the key to the recovery of the cardiovascular system.
The first large clinical study using MSCs from donor bone marrow was conducted in the USA in 2005. In parallel, the use of MSCs for the treatment of myocardial infarction was also tested. Even then, preliminary data on the safety and effectiveness of treatment for patients were obtained.
In 2015, several universities and clinics conducted larger randomized trials using umbilical cord mesenchymal stromal cells and obtained more impressive recovery results in patients with chronic heart failure and chronic ischemic cardiopathy. There was a significant improvement in the quality of life, the patient’s functional state and the work of the heart. A positive effect was also noted in the presence of aortic aneurysm and atherosclerosis.

Although all studies have shown safety and efficacy for patients, the question still remains of how to prolong the life of transplanted MSCs in the patient’s body in order to enhance their effect. Scientists are working not only on improving the quality of MSCs, but also on potential carriers – hydrogels, nanoparticles, matrices.
Don’t forget about umbilical cord blood. Although it was practically not used for large studies due to the cost of donor samples and the need for compatibility analysis, in the treatment of children with myocarditis, own umbilical cord blood may be the best choice. The unique composition of umbilical cord blood, its nativeness and the presence of different populations of stem cells allows for a longer therapeutic effect.
Our clinic also has a successful experience of using umbilical cord blood and MSCs from the umbilical cord in cardiovascular diseases.
In addition to available sources of stem cells, scientists are also experimenting with other types of cells, including modified adult cells – induced stem cells iPSc.
For example, in 2020, the European Heart Journal published the ALLSTAR study: intracoronary administration of allogeneic (human) stem cells derived from cardiosphere clusters for the treatment of dilated cardiomyopathy. Of the 134 patients, 90 received stem cell treatment, 44 received a placebo. The progenitors of these stem cells were obtained from other donors by heart biopsy and stored in a cell bank. On the basis of these biopsies, other cardiosphere cells were cultivated for introduction into the patient’s body.After 6 months, it was found that although the long-term predictions of a reduction in the area of ​​damage are unlikely, the group receiving cardiosphere cells showed a decrease in the end-diastolic and end-systolic volumes of the left ventricle (indicating an improvement in its systolic and diastolic functions). , as well as a reduction in NT-proBNP (an indicator of chronic inflammation and cardiac dysfunction) compared to the placebo group.
A year before that, a group of Greek scientists conducted research on rats: scientists induced acute autoimmune myocarditis in the latter with the help of special injections. Later, part of the rats were injected with allogeneic cardiospheric (obtained from heart biopsies of other mice) stem cells intracoronarily, and part was injected with a control substance. After 18 days, the researchers found that left ventricular ejection fraction was higher and end-systolic volume was lower in the cardiosphere cell treatment group compared to the placebo group, indicating improved myocardial function in rats with myocarditis. Further microscopic examination of the myocardium revealed a decrease in its inflammation and signs of fibrosis, which also indicates the effectiveness of this treatment.
Another interesting trial: the DYNAMIC study by scientists from the USA in the journal of the European Association of Mini-Invasive Percutaneous Interventions EuroIntervention. In 2020, researchers investigated multivascular intracoronary administration of allogeneic cardiosphere cells for the treatment of dilated cardiomyopathy in patients with low left ventricular ejection fraction.During the study, fourteen patients were injected with stem cells in 3 main coronary arteries. After 6 and 12 months, a statistically significant increase in left ventricular ejection fraction and improvement in myocardial function were observed in these patients.
And although research indicates a high potential for the use of stem cells in the treatment of myocarditis, not everything is so clear-cut. According to Harvard University professor Kenneth Chien, an eminent American specialist in the use of stem cells, clear selection criteria must be met to succeed in this matter. In his work “Regenerating the field of cardiovascular cell therapy”, published in the journal Nature Biotechnology, the main postulates are highlighted: the 5 “R” must be correct – target, tissue, safety, patient and translation. In the case of myocarditis, the “correct” patient is in the last stages of the disease, with a low ejection fraction and severe chronic heart failure. However, given the high rate of disability among such patients, stem cell therapy can return patients to a hospital-free life.