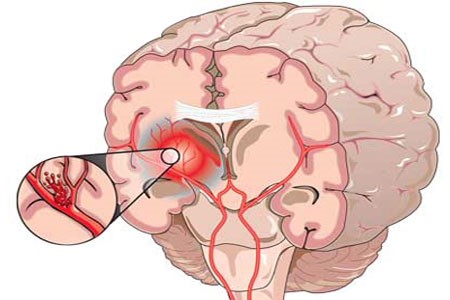 The process of treating hemorrhagic stroke with stem cells is based on the regenerative, unique abilities of a person’s own stem cells. Their introduction into the human body guarantees the complete regeneration of all vascular tissues, due to which the conductivity of brain neurons is restored in a natural way, and the procedure for rehabilitation of the body after a stroke is most effective.

A hemorrhagic stroke suffered by a person significantly changes his personality, makes it impossible to control his own body, limits the clarity of consciousness and thought, and makes habitual actions practically impracticable.

Hemorrhagic stroke – means intracerebral hemorrhage that occurs in patients suffering from hypertension, cerebral atherosclerosis, inflammatory changes in the walls of blood vessels, and various blood diseases. However, most often hemorrhagic stroke develops as a complication of hypertension and cerebral atherosclerosis. A stroke develops suddenly, against the background of physical or nervous strain, more often in the daytime. Some people sometimes feel the precursors of the disease, such as fever, severe headache, visual impairment, but these manifestations are quite rare. Hemorrhage in the brain occurs as a result of a rupture of a blood vessel or a violation of the permeability of the walls of blood vessels, and the main factor for their appearance is constant hypertensive crises against the background of arterial hypertension, which provoke the occurrence of spasms or paralysis of cerebral arterioles and arteries. The metabolic disturbances arising in the ischemic focus contribute to the development of changes in the walls of blood vessels, which, under these conditions, become very permeable to erythrocytes and plasma. Such a hemorrhage is called diapedetic.

Most often, a hemorrhagic stroke develops as a result of rupture of the vessel walls, which occurs with high blood pressure and leads to a hematoma. With long-term hypertension, the walls of blood vessels under the influence of high blood pressure become permeable and thinner, various microaneurysms and necrotic areas appear on them, which subsequently rupture. The vessels of the thalamus and subcortical nodes undergo the most severe changes in hypertension, therefore, most often, hematomas arise precisely in the subcortical nodes, spreading into the adjacent white medulla. The usual localization of hematomas is the cerebellum and pons, but in rare cases hemorrhages in the brain stem occur.

Hemorrhagic stroke develops acutely, previously this disease was called apoplexy. With the development of a stroke, manifestations such as a sharp headache, heart rhythm disturbances, rapid breathing, vomiting, hemiparesis or hemiplegia, a significant impairment of consciousness are characteristic. In the initial phase of the development of the disease, the patient is in an extremely serious condition and may even fall into a coma.

Medical treatment of stroke necessarily includes methods aimed at conducting an intensive course of vascular therapy and the use of drugs that will improve brain metabolism. Oxygen therapy and subsequent rehabilitation are shown, consisting of a complex of physiotherapy exercises, massage and physiotherapy. The world practice of treating hemorrhagic stroke implies an interdisciplinary approach in which the therapeutic process is led by representatives of various specialties: a physiotherapist, speech therapist, psychologist and doctor. Patients with hemorrhagic stroke need strict bed rest until their condition stabilizes and the acute period of the disease ends.

In addition to medication for hemorrhagic stroke, neurosurgical treatment is used, which is aimed at removing cerebral hematomas. During surgery, methods such as craniotomy and stereotaxic aspiration are used.

The consequences of a postponed hemorrhagic stroke are perfectly eliminated with the help of cell therapy. Today, the method of stem cell treatment is a fairly standard procedure, which has already been successfully performed in more than fourteen thousand patients. Only cell therapy allows you to completely regenerate damaged brain tissue and restore their conductivity to neurons, which in turn returns a person to normal mental and physical activity.

Many years of experience in the treatment of hemorrhagic stroke using stem cells shows that treatment should be started immediately, in the “ambulance” mode. This is what guarantees the return of a stroke patient to a normal life. Intravenously injected stem cells penetrate into the human brain and replace damaged neurons in the very place where the hematoma was formed. And, in addition, stem cells are able to synthesize substances that activate the processes of tissue regeneration at the cellular level, and grow new nerve cells and blood vessels, instead of those that have been destroyed. It is this unique ability that allows you to restore all the functions of the brain and eliminate the neurological symptoms of the disease and, regardless of whether a person has suffered a major stroke or a microstroke, cell therapy is able to return him to a completely normal life.

Treatment for hemorrhagic stroke, given within one week of the onset of the disease, gives the patient a chance for full recovery. But the use of cell therapy, even at different periods of time, has allowed thousands of patients to return to their usual lifestyle.

Cell transplantation is performed in two stages, in a sterile hospital environment. The interval between outpatient procedures is 3 months. For treatment, it will require at least two hundred million stem cells. The transplantation procedure lasts only forty minutes, the patient goes home, and the stem cells immediately begin their regenerative work, create new collateral pathways for feeding the brain, replace the necrotic zones with full-fledged ones, provide the brain with continuous nutrition with blood, oxygen and necessary substances with functional neurons.

Cell therapy will allow not only to recover from a hemorrhagic stroke, but also prevent recurrent strokes and remove all the root causes of the disease: hypertension, cerebral atherosclerosis, blood diseases and changes in the walls of cerebral vessels. In addition, stem cell healing is perfectly compatible with other therapies, and an active stimulus received at the cellular level will radically change the state of a patient who has suffered a stroke and relieve him of all negative consequences and manifestations.