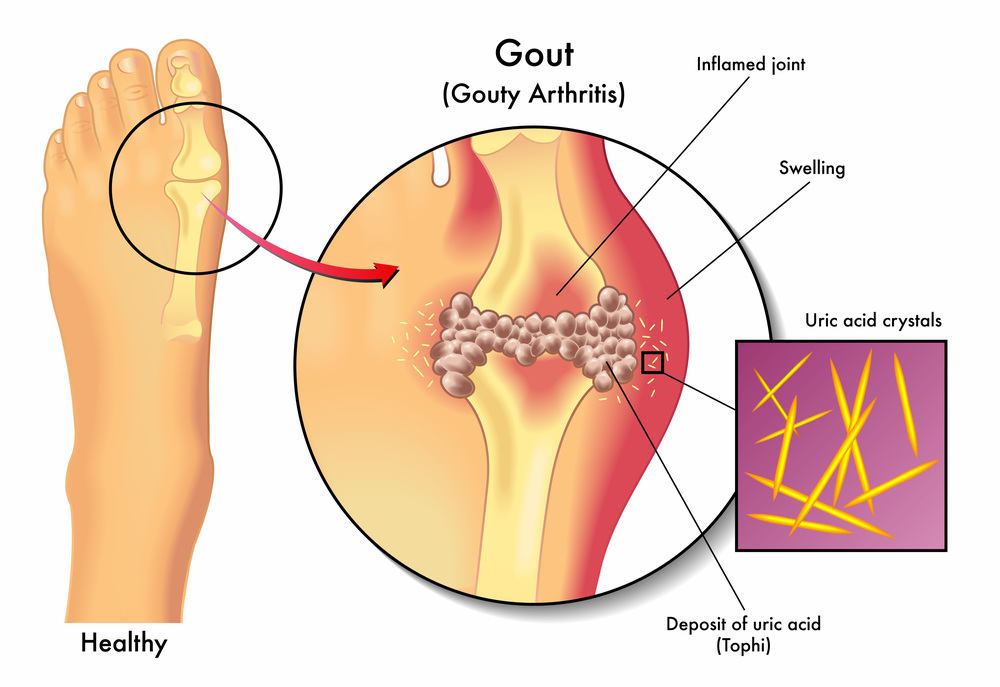 Gout is an inflammatory joint disease characterized by significant deposition of uric acid in various tissues and joints of the body.  Gout develops due to the excessive content of uric acid in the joint cavity and is a type of arthritis.  Men are more likely to suffer from gout, but the prevalence of the disease has also increased in the female population.  Gout is clinically manifested by acute recurrent arthritis and the formation of tofus – gouty nodes.  Gout affects any joints: feet, hands, fingers, knees, elbows.  However, the joints of the toes most often suffer from gout.  Uric acid is produced in the human body due to the destruction of various specific organic compounds called purines.  Uric acid is normally completely soluble in the blood and is excreted by the kidneys along with urine.  With pathological changes in metabolism, uric acid can form into crystals that are deposited around the joints and cause inflammation and pain in the affected joint.

The reasons of gout

Gout can develop under the influence of a variety of negative factors.  When eating foods that contain a large amount of purines, therefore, in case of gout, an important factor is adherence to a certain diet that excludes the consumption of salmon, liver, sardines, herring and other products.  Also, the cause of gout can be diabetes mellitus, overweight, hypertension, high cholesterol levels, alcohol abuse and smoking.  Gout can develop as a concomitant disease after undergoing anticancer therapy, renal failure.

The earliest clinical description of the symptoms of gout belongs to the English clinician of the 17th century T. Sydenham.  In his treatise on gout, he was the first to compare gouty pains with pain from the press of the foot of the limb.

Gout can develop suddenly and have seizures, most often at night, and the affected fingers become red, hot, and painful.  The big toe is more affected, but in some cases other joints may also join.

The attack begins suddenly, at rest, with a decrease in tissue hydration and the rate of diffusion of urates into plasma from the synovial fluid.  The attack is characterized by a very high intensity of pain, the pain syndrome is so pronounced that even touching the sheet to the affected area causes unbearable pain.  All inflammatory symptoms grow rapidly, reaching their maximum in just a few hours, hyperemia and swelling of the skin can resemble phlegmon.  Significant limitation of movement is observed in the affected area.  Symptoms disappear completely within 3-10 days.

At any stage of the disease, except for the first, nephrolithiasis may develop.  The permissible concentration of uric acid in the blood, articular inflammation of the monoarthritis type, accompanied by severe pain and fever, is constantly increasing.  In the future, recurrent pyelonephritis and urolithiasis develop, which culminate in the occurrence of nephrosclerosis and renal failure.  The bone in the affected joint can undergo complete destruction.

The diagnosis is established on the basis of the diagnostic criteria adopted by the Third Medical Symposium on Rheumatic Diseases.  Symptoms are confirmed by the presence of elevated levels of uric acid in the blood.  Microbiological and chemical detection of urate crystals in tissues and synovial fluid.  A clear observation of pain attacks with swelling of the joints of the extremities, which begin suddenly and are accompanied by severe pain syndrome.  Revealing lesions and deformities of the big toes.  The presence of tofuses and a quick reaction to colchicine.  Sometimes an x-ray is indicated, which can show damage to bone tissue and tophus deposits.

Traditional methods of treating gout include several stages.  This is the removal of an acute attack, prevention of the next exacerbation, prevention and treatment of complications and concomitant diseases.

Uricodepressants are prescribed, which suppress the production of uric acid, this therapy continues for one year.  Also, uricosuric drugs are prescribed, which enhance the excretion of concentrated uric acid from the body.  The most famous and effective drug uricodepressant, today is alopurinol.  When prescribing and taking these drugs, it should be remembered that in the first days, due to the excretion of an increased amount of uric acid, the risk of kidney stones formation increases, therefore, special drugs are used to prevent urolithiasis.  Also, after the appointment of anti-gout drugs, the risk of acute rheumatic attacks may increase.  For this reason, anti-inflammatory nonsteroidal drugs are prescribed.  Also, with gout, great importance is attached to a special diet, consisting mainly of dairy and plant products and foods high in vitamins C and P. It is also necessary to consume a large amount of liquid per day.

Various physiotherapeutic procedures are indicated for gout: radon, mud and hydrogen sulfide baths, balneo and physiotherapy, which are carried out in remission.  Only UV irradiation procedures, ultrasound and lithium-potassium electrophoresis are prescribed in the acute period, since they have a resorbing, analgesic and anti-inflammatory effect.

Traditional medicine is aimed only at symptomatic treatment and relief of gouty attacks.  In order to eliminate the cause of the disease, an innovative method of treatment is used today – regenerating cell therapy.  The sooner you start treating gout with autologous cells, the better results you can achieve.  Otherwise, own stem cells affect the disease in a complex, normalize all metabolic processes in the body and affect the regeneration of the affected joints.

After transplantation, autologous cells penetrate into the damaged area and replace all destroyed, diseased and abnormal cells of joints and tissues.  Normal metabolism is restored, the content of uric acid in tissues, joints and blood is normalized.  Nutrition of the joints by growing new blood vessels is fully restored, and the stimulation and normalization of the immune system significantly reduces the likelihood of any infection, fungus or bacteria entering the human body.

The result of treatment with cell therapy is the disappearance of pain, edema and inflammation.  All functions of the affected joint are restored, metabolic processes are improved.