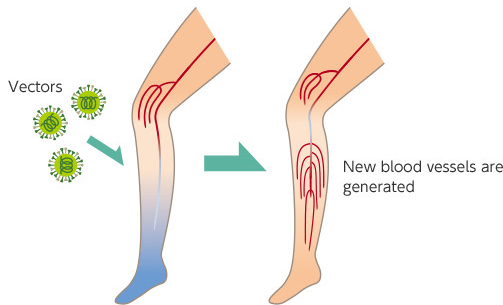 The basis of ischemia of any tissue is a violation of its nutrition and, consequently, the supply of oxygen against the background of problems with the vascular system.  A similar picture can be observed with a number of diseases.  Absolutely all human organs are subject to ischemic changes.

To eliminate this problem, both conservative and surgical measures are used, and recently it has entered the range of indications for cell therapy.  The use of stem cells, in fact, made a splash in this field.  Thanks to this modern technique, it has become possible to preserve limbs in almost hopeless situations, when, it would seem, the only way out is amputation, for example, in such critically serious conditions as pre-gangrene.

Transplantation of allogeneic, that is, own stem cells is successfully performed with obliterating endarteritis, atherosclerosis of the vessels of the lower extremities, trophic ulcers against the background of thrombophlebitis or varicose veins, as well as to eliminate angiopathy in patients with diabetes mellitus.  The main advantage of cell therapy is that it has a stimulating effect on the formation of new vascular collaterals, and as a result, blood is delivered to the damaged tissues bypassing the damaged areas.  In addition, the stem cells introduced into the bloodstream improve the permeability of the vessels in the place where they are either damaged or there are blood clots, fibrous growths or atherosclerotic plaques.

The de novo growth of blood vessels is ensured by special angiogenic factors produced by stem cells in large quantities.  The implanted stem cells themselves in the ischemic zones differentiate into angioblasts, which give rise to the endothelium of blood vessels, and literally line up into new vessels, forming collaterals and additional capillary networks.

In this case, they are administered directly into the affected limb and intravenously.  In this case, the injection is carried out into the appropriate vessel (depending on the localization of the pathological focus) during angiography after preliminary balloon angioplasty (for the purpose of expansion).

This method of treatment contributes to the normalization of the endocrine system, in particular, the thyroid and pancreas, which entails a decrease in body weight (with excess weight), compensation for diabetes mellitus (if any).  The patients’ metabolism stabilizes, a surge of vitality and energy occurs, and efficiency increases.  And most importantly, it is possible to save the damaged limbs.

After the introduction of stem cells in patients suffering from ischemia of the extremities, the development of collateral circulation is angiographically confirmed, which is clinically manifested by a decrease in the severity of pain syndrome or its complete disappearance, an increase in local skin temperature.  Cell therapy stimulates the healing of ulcerative defects and gradually leads to the elimination of all changes caused by ischemia.