Self-stem cells are today the most effective and painless method of eliminating the causes that cause an inflammatory disease such as prostatitis.

This is one of the most famous diseases in urology, which affects only the male half of the planet. Prostatitis is an inflammatory process that is localized in the prostate gland.

The prostate, or prostate gland, is one of the accessory parts of the male reproductive organs. It is located directly under the body of the bladder neck, and the urethra is located under the prostate. It is due to this placement that the inflamed prostate can partially or completely, depending on the severity of the disease, block the flow of urine.

Inflammation and enlargement of the prostate is quite common in men over 35 years of age.

Prostatitis appears due to the ingress of various infections, as well as a complication of the transferred infectious diseases. Also, the causes of inflammation of the prostate are frequent local hypothermia, disturbances in sexual activity, perineal trauma, a sedentary lifestyle. Usually, a person devotes quite little time to such aspects of his life, therefore, quite often the disease spills over into a chronic form.

Chronic prostatitis as an independent disease has been known for more than 150 years, and during all this time, this disease was considered practically incurable. Chronic prostatitis can be called a complex concept, which includes a fairly wide range of various diseases of the prostate gland and lower urinary tract – from infectious prostatitis, chronic pelvic pain syndrome, metabolic and allergic disorders in the prostate to various neurological disorders.

Acute prostatitis is characterized by such manifestations as fever, burning in the perineum, unpleasant pulling sensations in the lower abdomen, painful frequent urination, pain in the rectum during bowel movements. Edema of the prostate, which forms during the disease, can provoke urinary retention, while quite strong.

Chronic prostatitis has a calmer course of the disease, but under the influence of various unfavorable factors, its exacerbation can occur at any time. The disease proceeds for a long time, with phases of remission and exacerbation.

burning sensation in the urethra, and acute pain in the perineal region;
scanty discharge at the end of the act of urination;
nervousness;
high fatigue;
specific pain during ejaculation;
there may be pain in the testicle area;
premature ejaculation.

Quite often, chronic prostatitis leads to complications such as kidney damage, the development of inflammation of the seminal vesicles, various inflammations in the testicles and their appendages, which in turn often leads to premature ejaculation, infertility and impotence.

The potency and vital activity of spermatozoa directly depend on the state of the male prostate gland.

Chronic prostatitis is a disease so treacherous and complex that its treatment is a very big problem for urologists around the world. Today, traditional medicine is not able to completely cure a patient suffering from prostatitis, however, doctors are able to eliminate the signs of the disease and cause a long-term stable remission. For the treatment of the disease, antibacterial therapy, physiotherapy, immunocorrective therapy, prostate massage are used. Treatment is carried out only in aggregate, it is under this condition that the desired effect can be guaranteed. 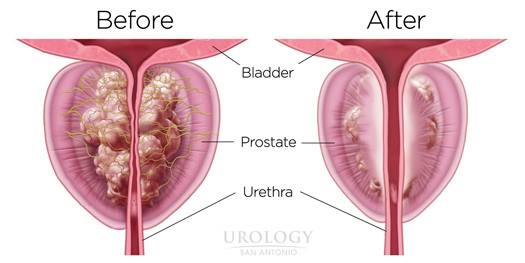 Antibiotic therapy is necessary, since the disease is provoked by various microorganisms and pathogenic bacteria. The scheme of taking the drug and the choice of the drug necessary for a person, in each case, are selected strictly individually.

The most unpleasant way of treating prostatitis, men note the use of prostate massage. The action of such a massage is aimed at squeezing out the inflammatory secretion accumulated in the ducts of the gland with a finger. With this massage, the blood supply to the gland increases, which enhances the effect of antibacterial drugs. The effectiveness of this massage is due to the unique location and structure of the prostate, in particular its ducts.

It should be noted that the prostate is the only human organ whose massage really helps in healing inflammation. Physiotherapy measures for prostatitis are aimed at increasing blood circulation in the small pelvis. For these purposes, ultrasonic waves, electromagnetic oscillations, etc. are used. Immunocorrection is carried out to restore and increase the protective functions of the body. Normalization of the lifestyle is important in the treatment of prostatitis.

Treatment of prostatitis with cell therapy is based on the ability of stem cells to repair or replace the damaged prostate tissue by inflammation and strengthen the human immune system. Thanks to cell therapy, inflammatory processes in the prostate gland are completely removed, and the formed adhesions are absorbed. Equally important is the ability of autologous cells to grow a new vascular network, it is this action that is aimed at relieving pain manifestations and restoring the correct functioning of all receptors located directly in the walls of blood vessels and prostate ducts. Thanks to this ability, blood stagnation in the small pelvis and prostate tissues stops and proper, healthy blood circulation is established.

As a result of cell therapy, the outflow of urine from the bladder is completely normalized, which has a positive effect on kidney function, and sexual function is also restored.

Chronic prostatitis, if left untreated, leads to impotence, so treatment with cell therapy is recommended to start as early as possible. Today, no traditional treatment, except for cell therapy, can guarantee a pronounced resorption of the formed adhesions. Only own stem cells are able to replace tissues damaged by the inflammatory process after transplantation, completely getting rid of adhesions and restoring normal functioning of the prostate.