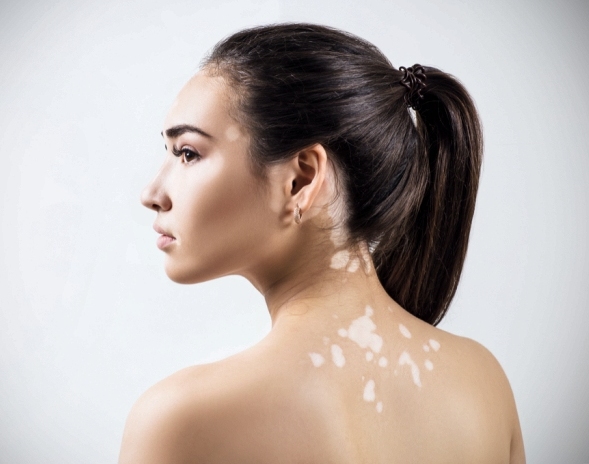 Vitiligo is a skin disease, the main symptom of the disease is the disappearance of melanin in certain areas of the skin and, as a result, the formation of white, depigmented spots on the skin.  It occurs on the skin, presumably, as a result of exposure to certain medicinal and chemical substances, neuroendocrine, neuro-trophic and autoimmune factors of melanogenesis, as well as after inflammatory processes on the skin.  A predisposition to vitiligo can be inherited.  The nature of the disease is not fully understood.

It is reliably known that vitiligo is not contagious and not dangerous to others.

The course of the disease is long, white spots can appear on the trunk, limbs, face and other places, but most often on the hands, elbows, knees – where the skin is most injured.  Increased sensitivity of depigmented areas to sunlight and artificial ultraviolet rays is characteristic.  Vitiligo disease occurs at any age, but more often at a young age.

All therapeutic measures are aimed at preventing the appearance of new spots and reducing the cosmetic defect.  For the treatment of vitiligo, antioxidants and immunomodulators are used.  Also, strictly dosed ultraviolet irradiation of the skin, PUVA therapy, laser exposure are used.  There are also methods of surgical treatment, when artificially grown melanocyte cells are implanted in the vitiligo focus.

The treatment is based on the results of research on the so-called induced pluripotent stem cells, which every adult has.

They can be made to act like embryos, with the result that they have the ability to transform into any cell in the human body.  This seemingly harmless method opens the door not only for the treatment of vitiligo, but also for the creation of new tissues and organs that can replace the damaged ones.  Moreover, without fear of the fact that the new tissue will be rejected by the immune system, which often happens during transplantation.